At Onboard Maritime we align our study programmes and materials with the MCA syllabus, current industry events and good practice. The blog below expands on some of the key learning points from the recently published Marine Accident Investigation Branch (MAIB) reports.

To find out more about Onboard Maritime and how we deliver our courses across all levels, go to www.onboardmaritime.com

The reports resulting from an investigation by the Marine Accident Investigation Branch (MAIB) are an excellent resource for anyone working at sea and essential reading for anyone preparing for an MCA Orals examination.

On 6th February the MAIB published its report into the grounding of the ferry ‘Seatruck Performance’[1] while transiting Carlingford Lough in Northern Ireland.

The report identified a number of reasons why the vessel grounded which are well worth developing in a bit more detail.

1. Bridge Organisation Resulting in a Single Point of Failure

The term a single point of failure (SPOF) refers to a system that if one part fails then the entire system will stop working.

It has consequences for all operations that rely on consistency and reliability to achieve its goals. It therefore has relevance across a number of industry sectors including, software engineering, performance engineering, the medical profession, the airline industry and of course shipping.

If you have attended a Bridge Resource Management course, you would have been introduced to the concept of SPOF and the need to build redundancy into a system to make it more robust and remove the reliance on one person or component.

A comparison between what is accepted to be the characteristics of a bridge team exercising good practice and the actions of the bridge team highlighted in the MAIB report reveals a gap which resulted in a SPOF.

These characteristics of BRM are from the Nautical Institute publication ‘The Navigator’. Although the article was published in 2014 it is extremely relevant for the above case study 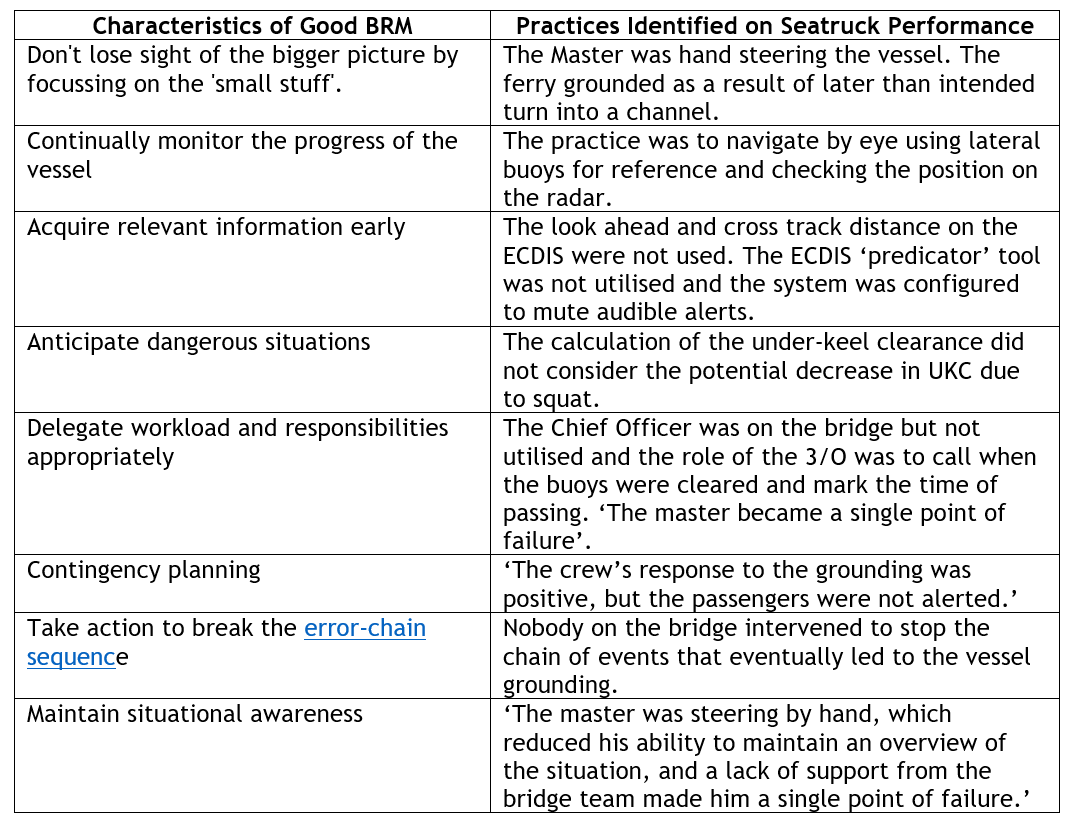 2. The Difference Between Static Draught and Dynamic Draught

The UKC of the channel was calculated from the departure draught of the vessel and didn’t consider the squat the vessel would experience when travelling at speed in the channel. The Mariners Handbook (10th Edition Chapter 11.87) states that, ‘squat is the decrease in under-keel clearance which occurs when a vessel is making way or is stationary (berthed or anchored) in moving water.’

Two factors determine the effect of squat on a vessel and these are its block co-efficient (Cb) and its speed.

The Mariners Handbook, gives a formula that can be used to estimate the effect of squat in very shallow open water which is:

The effect of applying squat to the draught of the ‘Seatruck Performance’ can be seen in the picture below. By estimating a squat of 1.4m the under-keel clearance is reduced from 1.5m to 0.1 m 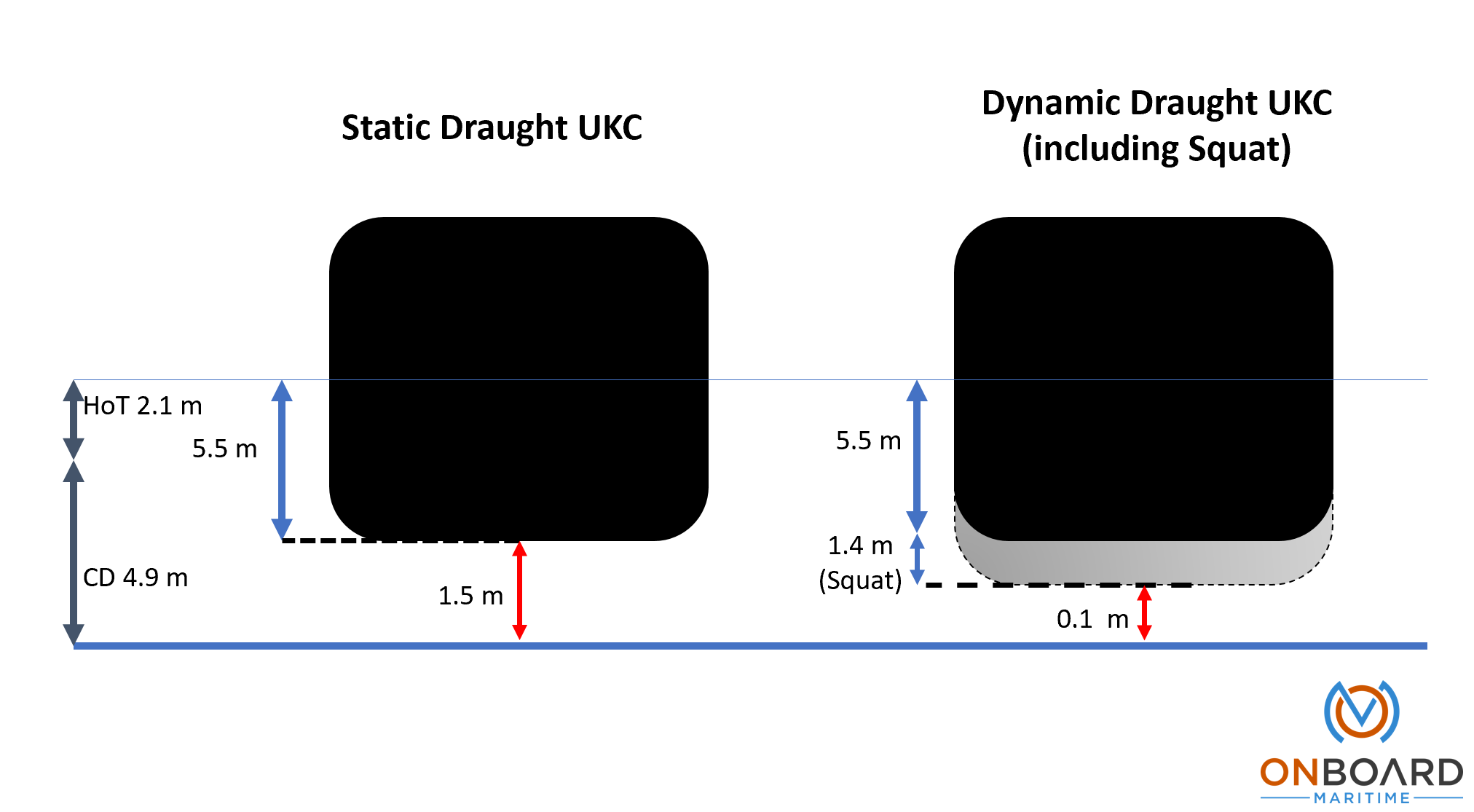 The second MAIB report was published on February 13th concerns the bulk carrier Gulnak[1] who collided with the bulk carrier Cape Mathilde which was moored in Teesport alongside Redcar bulk terminal. The Gulnak lost its heading when turning to port which resulted in the collision.

The resulting investigation could not identify a single direct cause however it highlighted the need for the bridge team to be aware of hydrodynamic effects on the vessel when navigating in restricted waters.

This may have influenced the vessels directional stability.  This would be as a  result of interaction between the vessel, the river and the effect of squat.

The report states that some of the characteristics of a vessel experiencing shallow water effects can be  erratic steering and increased turning circle. A vessel is likely to experience these if the water depth is less than 1.5 times the draught of a vessel.

Two separate reports on two very different incidents each occurring in restricted waters. I think there are two points we can take away from these reports, particularly if you have an MCA orals date booked in the near future.

Friday, 29 January 2021 How to psychologically prepare for your exams by Tom Feakins, Master Mariner
Friday, 18 December 2020 Our 2020 Roundup
Wednesday, 25 November 2020 We are hiring; Navigation and Stability Lecturers (full time, part time and associates)

Maritime Education – Will Things Ever be the Same?

Why You Fail Your MCA Oral Exam When You Have The Knowledge!

Have a query before you book?

Copyright © 2020 Onboard Maritime.
All Rights Reserved.